GuiPy is a Python IDE for teachers and students based on PyScripter. Most Python IDEs only support text-based coding. GuiPy instead provides several graphical tools that support learning and teaching Python programming concepts. These include: The order of attributes and methods in the structure tree can be changed using Drag&Drop.

You call the class modeler via the icon

in the editor window. You can also double-click the desired class in the UML window or use the context menu to invoke the class modeler.

The class modeler takes the UML standard into account, which is why String is also offered as a data type. When converted to Python source code it automatically becomes str.

After you have modeled a class using the class modeler, it is time to test your model. In the uml window, by opening the context menu of a class with the right mouse button, you can invoke the constructor to create an object interactively.

If you then call the context menu of the created object, you can edit the attributes and call the methods of the object. Changed attribute values are easy to see and objects created by a method call are immediately displayed. This is especially useful when working with dynamic data structures such as lists and trees. 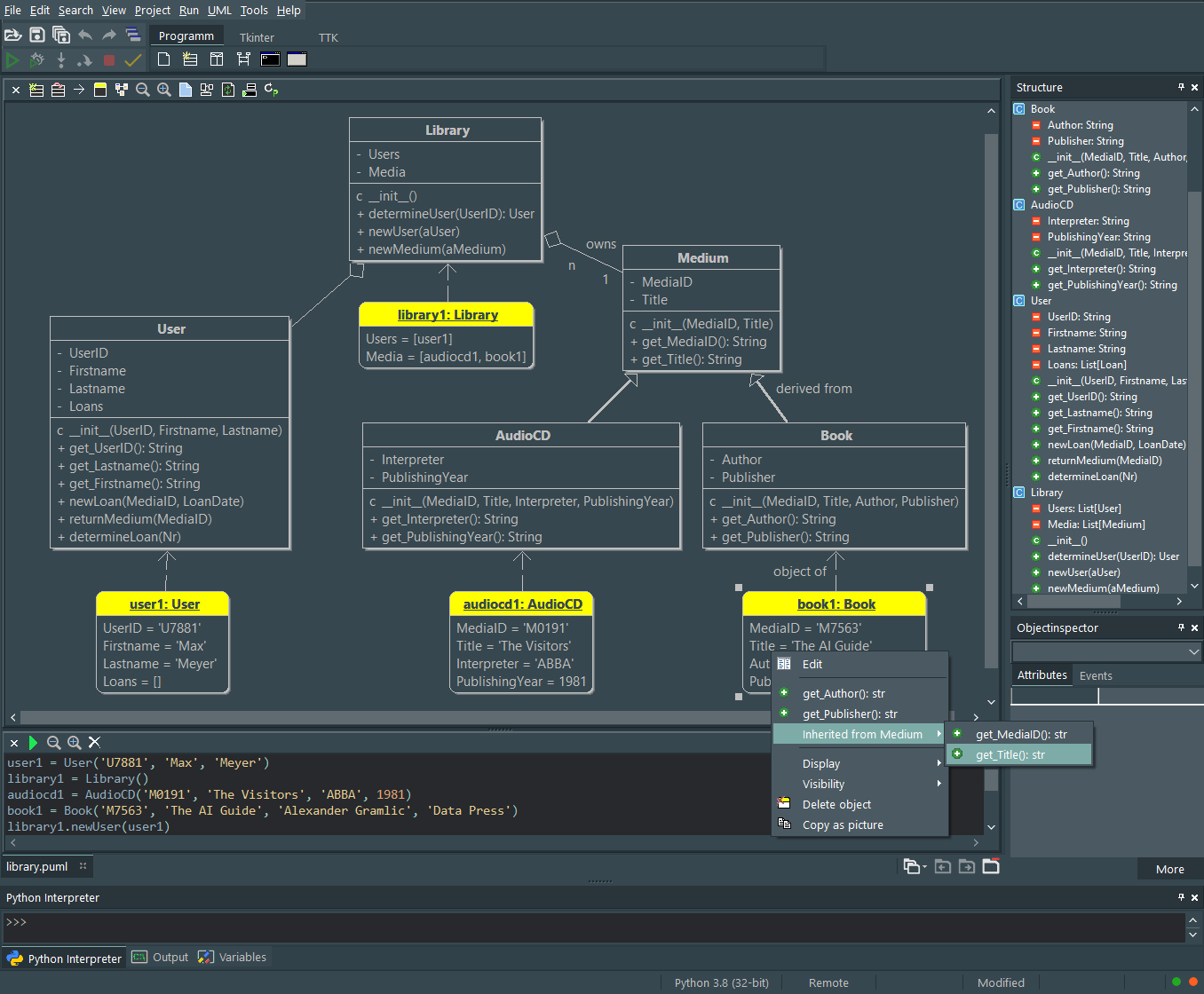 After testing your model in the uml window you can use it in a console or GUI program.

It's quite complicated to design a graphical user interface with layout managers. Students have considerable difficulties with this. It's much easier to drag and drop widgets to the desired position on the form. The GUI designer available in GuiPy therefore does not use layout managers but absolute positioning, which allows you to design your layout quite quickly. 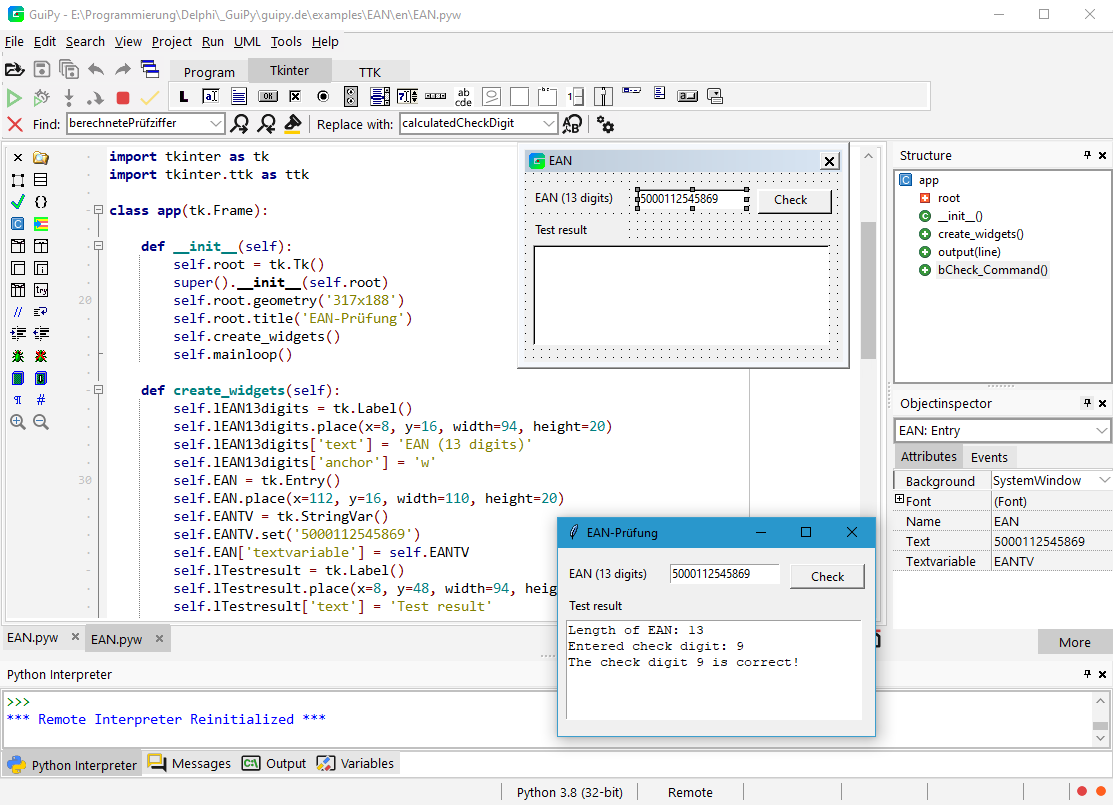 icon on the „Program“ tab. This provides a skeleton program in an editor window and a GUI form.

To place a widget, first click its icon on the Tkinter or TTK tab and then on the GUI form. Alternatively, you can drag and drop a widget from a tab onto your GUI form. You can then position the widget and configure it using the object inspector. The source code is synchronized accordingly.

icon of the source code editor to open the associated GUI form.

The GUI form has a context menu for editing the widgets.

The modeling of processes with structograms on a programming language-independent level plays an important role in computer science lessons because algorithms can be modeled on an abstract level without specific programming language details. An algorithm can be understood without being able to program it yourself in Python. Drawing structograms by hand on paper does not produce respectable results, because structural changes are practically impossible. With the structogram editor, structograms can be created easily, quickly and correctly.

Python source code can be generated from structograms, whihc must then be edited. This helps when implementing in Python. The other way round is also possible. In the editor you can select source text and generate a structure diagram from it. 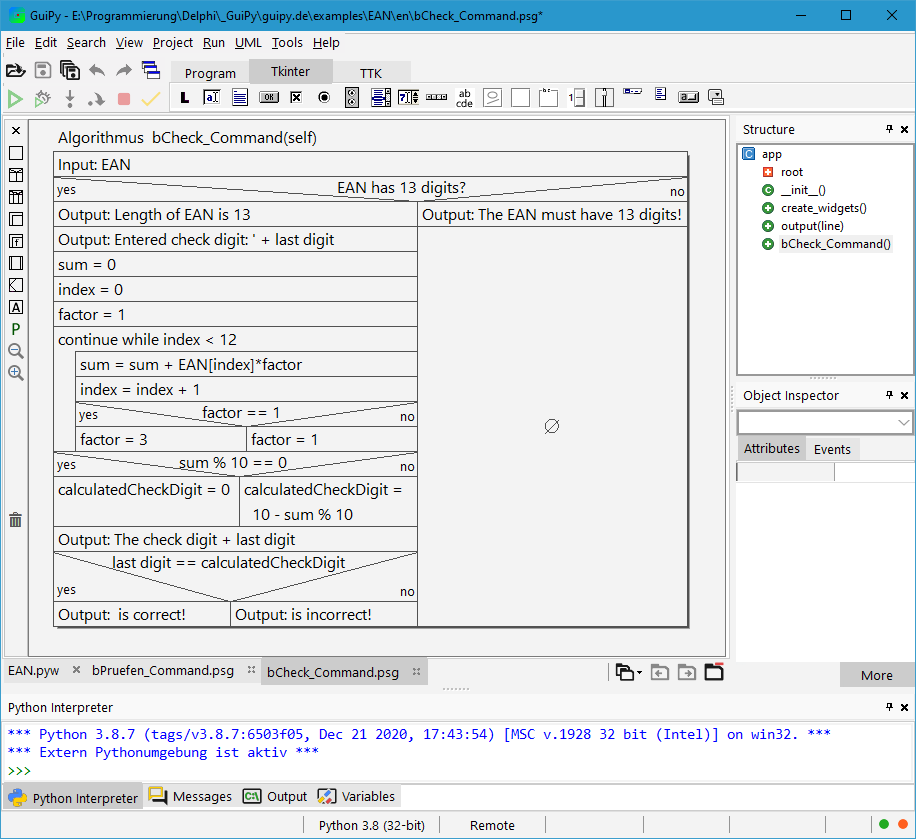 The Sequence Diagram Editor allows you to create a sequence diagram interactively. Lifelines come in two forms, as an actor and with a named head. They are inserted using the toolbar. To create a connection between lifelines, use the context menu of a lifeline and call connect to there. To change texts, call up the text editor by double-clicking. Sequence diagrams are saved with the file extension psd. These are text files that can also be edited with external text editors.