The EAN check is an example of a simple GUI application. It has an entry widget for entering an EAN and a text widget for the multi-line output of results. 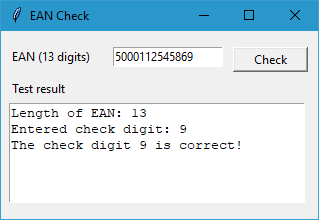 This event method is programmed for the „Check“ button:

the EAN entered in the Entry widget is read into the local variable EAN of type str(ing) and can then be processed.

The processing part checks whether 13 digits have been entered and then performs the check digit calculation.

Outputs are made to the text widget Output. It has very powerful methods, so even just outputting a single line isn't quite easy. A separate method output() is therefore used in order to simplify programming.

This inserts a line at the end of the text widget Output and ends it with the control character '\n' (NewLine). If an output line consists of several substrings, these must be put together with „+“. Numbers must first be converted into a string using str().

The output is easier in Qt than in Tkinter/TTK:

This example is suitable for the introduction to object-oriented programming. Fuel gauge and mileage of a car are modeled. The actual modeling takes place with the class modeler. The license plate is not absolutely necessary, it is used to make it easier to distinguish between cars and to use another data type. The result can be tested interactively in the UML window. The students understand the difference between the concepts class and object. In the next step, the car class is used as a functional specification in a GUI program. The GUI program uses the car class. To do this, it must be imported. A car is created and provided as attribute car1 of the GUI class for further use.

When refueling, the quantity entered in the entry widget is read in via the get() method of the control variable eAmountCV belonging to the widget and converted into the required data type using float.

Then, according to the IPO principle, the entered amount is processed in the refuel() method.

Finally, the result is output with a separate method show(). The values for license plate, tank contents and mileage are retrieved via the get() methods of the class car and passed to the set() methods of the control variables eLicenseplateCV, eTankcontentCV and eMileageCV:

The label widget lCar has been assigned a car image via the Image attribute in the object inspector. The place() method sets the x position of the car to the mileage.

When refueling, the quantity is read in via the text() method of the LineEdit widget and converted into the required data type using float.

Then, according to the IPO principle, the entered amount is processed in the refuel() method.

Finally, the result is output with a separate method show(). The values for license plate, tank contents and mileage are retrieved via the get() methods of the class car and passed to the setText() methods of the widgets leLicenseplate, leTankcontent and leMileage:

The label widget lCar has been assigned a car image via the Pixmap attribute in the object inspector. The move() method sets the x position of the car to the mileage.

Programming dynamic data structures is a significant challenge, as one must understand the concept of linking using references and perform complex operations on references. New are variables that have values that are references to objects or addresses.

In this example we consider a singly linked linear list. The list itself is modeled as a class LinkedList with nodes as list elements. As an attribute it has a reference to the head of the list.

The Node class can store data in the first attribute and a reference to a next node of the linked list in the next attribute. If a node has no next node, this attribute has the value None.

The implementation of an insert operation is difficult because four cases must be distinguished:

The first two cases can be implemented with the method insert_first():

The implementation can be tested in the UML window. To do this, you create a linked list and a node, call the insert_first() method via the linkedlist1 object and enter the value node1 for the node parameter. To insert at the end of the list, you must use a loop and a cursor variable to navigate to the last element. The new node is added there.

Inserting before a node is the most difficult case because the new node must then be inserted after the previous node. In addition to the cursor, you need another reference to the previous node. The node before which to insert is determined by its data.

Deleting a node is just as difficult because the previous node must be connected to the following one in order to delete it.

The functionality of the implemented methods can be checked very well by interactive testing in the UML window, because the result is visualized in the object diagram. You can see immediately whether a method worked as expected. In the picture the list with the elements 'a, 'b' and 3 was created and then the node with data = 'b' was deleted. That worked, because the list consists only of the two elements 'a' and 3. The deleted node is just deleted from the list. Python's garbage collection takes care of it. In the UML window, objects are identified by their addresses. In the example, the address 0x01CFA688 for the node1 object.

Therefore, do not implement a __repr__ function for your classes, because then these addresses will no longer be available.